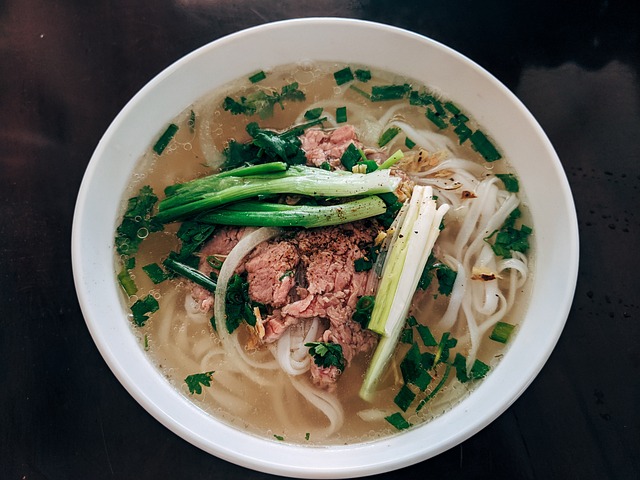 The Pho dish is one of the most popular dishes in Vietnam. It is a soup traditionally made with rice noodles and beef or chicken broth. It is often served with herbs, vegetables, and other ingredients such as meatballs and eggs. The noodles are boiled in water just until they’re softened, but not fully cooked. The dish usually includes flavourings such as onions, ginger, soy sauce, lemongrass. In this post i’ll show you how to make pho: 3 simple steps

The Different Types of Pho

Hanoi’s traditional Pho dish is considered the most sophisticated pho dish available. Vietnam’s northern regions are known for the Hanoi style pho. To give the pho in Hanoi style a silky texture, oil is thinly spread over it. Lime, bean sprouts, and chilies are some of the side dishes of pho.

For beef lovers, Pho Bo is a must-try. Rice noodles are the only component without beef. The broth is made from beef bones, tails, and necks, while the toppings include thinly sliced fatty brisket, steak, cooked, and raw beef. It is garnished with fresh cilantro leaves, cloves, and cardamom.

One of the most popular pho dishes in the USA is Pho Ga, commonly known as pho chicken noodle soup. Additionally, it is divided into Binh thoung (standard), consisting of dark meat, breast meat, etc., and Ga Nac (lean chicken), consisting of thinly sliced chicken breasts.

Many people might be surprised by Pho Cuan since it is not the typical pho that one expects to find at a pho restaurant. Pho Cuan is a Pho roll wrapped in rice noodles. Among the ingredients used to stuff Pho Cuan are stir-fried beef, ginger, onions, and herbs like mint and cilantro.

Pho Cuan is served with a dip made with fish sauce, sugar, vinegar, garlic, and chilies.

People who are not meat lovers can also enjoy pho soup. Many pho noodle soups have tofu, cheese, or vegetable stock.

Protein found in meat supplies the body with great nutrients and energy for body building.

Gluten-free rice noodles are suitable for people with Celiac disease.

There are several nutrients in pho broth that are beneficial to the skeletal system, including glucosamine, collagen, and chondroitin. In addition to gingerol, cardamom and spices contain anti-inflammatory and antioxidant properties.

In each region of Vietnam, sometimes even within regions, the ingredients for cooking Pho may be prepared differently. Chicken and beef are used in different ways and with different flavours, to create different pho dishes.

Step 1: Prepare the essential ingredients for the Pho soup

– Meat for Pho: brisket, flank and tendon or beef balls

Step 2: Simmer the broth – the broth is the most essential ingredient of pho soup

– Boil the meat bones for 20 minutes to remove the smell, then wash the bones with water

– Put the meat bones and beef in a large pot and dry it with spices for at least 6 hours. After 2 hours, remove the beef from the dish.

– Take out the impurities in the soup, add salt and fish sauce.

Step 3: Add the ingredients for the Pho soup and enjoy

– Put the rice noodles in a bowl, add a few pieces of beef, green onion, and pour the hot sauce over the pho toppings.

Phở, pronounced “fuh”, is a Vietnamese soup of beef broth, banh pho noodles, and thinly sliced beef, often served with vegetables. Not to be confused with Japanese ramen, which is usually made with wheat, pho uses rice. The most common are pho nam, from southern Vietnam, and pho bac, from northern Vietnam and considered the first pho. Despite the fact that there are many varieties of pho, it is worthwhile to remember that they are all delicious.